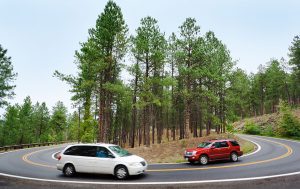 When it comes to choosing a vehicle for your family, many see it as a choice between a Sports Utility Vehicle (SUV) or a minivan. Both classes of vehicles have evolved over the years, to the point where it can be difficult to distinguish between them. Here’s a look at some key features in each type of vehicle, and some considerations for insuring whichever one you choose.

Midsize and larger SUVs provide seating for six to eight passengers, making room for a family of four as well as the occasional extra passengers and cargo. While technically able to carry an advertised number of passengers, many mid-sized SUVs can only comfortably accommodate larger numbers of passengers for shorter trips. An SUV's shape limits the size of the cabin, often at the expense of leg room, hip room, and headroom.

SUVs generally tend to be more costly to insure, but you can always explore multi-policy discounts, which can help to maintain your household budget.

The functionality of SUVs and minivans is becoming more similar, and the decision often returns to one of increased practicality versus styling preference.